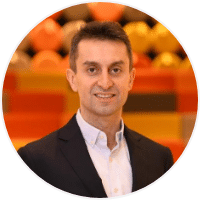 Chairman TOBB - The Union of Chambers and Commodity Exchanges of Turkey

Ozan Acar is the Chairman of the Turkish E-commerce Council at TOBB. Also he responsible the corporate affairs as Executive Committee Member in Trendyol Group. Trendyol is a tech company. They were been established in 2010 to provide a seamless e-commerce experience to their customers and vendors. In ten years, they became the largest e-commerce company in Turkey, as well as one of the leading global platforms. They continue to grow and create value through their three main divisions: Trendyol Tech, one of the leading R&D centers; Trendyol Express, the fastest growing delivery network; Dolap, the largest second-hand goods platform and Trendyol Go is the local services arm of Trendyol Group with the goal to deliver anything in 30 minutes. Ozan Acar was the Head of Industry Councils and Entrepreneurship Department at the Union of Chambers and Commodity Exchanges of Turkey before Trendyol Group’s position. He coordinated the activities of 61 different industry councils which brings together 2500+ most prominent private companies with the purpose of facilitating the contribution of the private sector to the sectoral policy making processes. He also coordinated TOBB’s strategic engagements with technology companies, including digitalization initiatives   Before joining TOBB, Acar was working at the Economic Policy Research Foundation of Turkey (TEPAV) as the founding director of the competitiveness program. At this capacity he led various projects on industrial and technology policies. He was appointed as the rapporteur of the International Development Cooperation Ad-Hoc Commission for the Tenth Development Plan of Turkey’s Ministry of Development while he was at TEPAV. Ozan Acar has also extensive experience in international organizations including the World Bank, Abu Dhabi Crown Prince Court, Brookings Institution, and Harvard’s Center for International Development. Acar received his BA and MA degrees in economics from Bilkent University in Ankara. He also holds an MPA in international development from Harvard University’s Kennedy School of Government.